Creation and Beginnings of the Court

The Supreme Court of Canada came into existence more than a century after the first courts appeared in what is now Canada. Its role has evolved considerably since its creation in 1875, as it stands today as the final court of appeal in the Canadian judicial system, a status that it did not originally have.

Courts of law flourished in the eighteenth-century in present-day Quebec and Ontario, as well as in what are now the Maritime provinces. Judicial records from before 1750 survive in Quebec, New Brunswick and Nova Scotia. The Quebec Act, 1774, section 17, defined powers for creating British-style criminal, civil and ecclesiastical courts in Quebec alongside that province's much more ancient courts dating back to the French regime. The Constitutional Act, 1791, created the provinces of Upper and Lower Canada and established new courts for each province. Following this, the Union Act, 1840 created the first Court of Appeal, in this case for Upper Canada, and set salaries for judges in both Canadas.

It was the British North America Act, 1867, now called the Constitution Act, 1867, that defined the basic elements of the country's current judicial system. Under it, the Governor in Council appoints all superior court judges across Canada, including judges of the Supreme Court of Canada. Once appointed, a judge serves "during good behaviour" and benefits from all aspects of the principle of judicial independence. A judge may sit until he or she attains 75 years of age. Judicial salaries are "fixed and provided by the Parliament of Canada". At the time of Confederation, decisions of provincial courts could be appealed directly to the Judicial Committee of the Privy Council in the United Kingdom.

The Constitution Act, 1867 provided that the new federal Parliament could create a "General Court of Appeal for Canada". A few years later, Parliament did just that when it created the Supreme Court of Canada. However, decisions of the new Supreme Court could still be appealed to the Judicial Committee of the Privy Council. The Judicial Committee's jurisdiction over the Court's decisions did not end until 1933, for criminal appeals, and 1949 for civil appeals.

The Supreme Court of Canada's beginnings were most inauspicious. Bills for its creation had been introduced in the Parliament of Canada in 1869 and in 1870, but were withdrawn. On April 8, 1875, a new bill was finally passed. The statesmen who played the most prominent roles in establishing the Court were Sir John A. Macdonald, Télesphore Fournier, Alexander Mackenzie and Edward Blake.

On October 8, 1875, the first Chief Justice, the Honourable William Buell Richards, and the first Registrar, Robert Cassels were sworn in. The Court's other judges signed their oaths of office in the Senate Chamber on November 8, 1875. The Court was inaugurated at a state dinner on November 18, and by mid-January 1876 the new Court had drafted a set of rules of procedure. At its first sitting on January 17, 1876, there was not a single case to be heard. The Court heard its first case — a reference from the Senate requesting its opinion on a private bill — in April 1876. Having dealt with that matter, the Court next sat for one week in June 1876, when it disposed of three cases. It was not convened again until January 1877, at which time it began to hold regular sessions with a full agenda.

The Court was originally composed of six judges. In addition to Chief Justice Richards, the original judges were William Johnstone Ritchie, Samuel Henry Strong, Jean-Thomas Taschereau, Télesphore Fournier and William Alexander Henry. At first, each member of the Supreme Court was also a judge of the simultaneously created Exchequer Court of Canada (a forerunner of the Federal Court), although this ceased to be the case several years later. 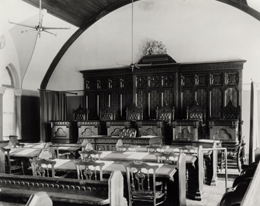 View image details of the Courtroom in the old Court building

In 1927, the number of Supreme Court judges was raised to seven and, in 1949, with the abolition of all appeals to the Judicial Committee of the Privy Council, the Court reached its present total of nine members. Of the nine, the Supreme Court Act requires that three be appointed from Quebec. Traditionally, the Governor in Council has appointed three judges from Ontario, two from the Western provinces or Northern Canada and one from the Atlantic provinces. 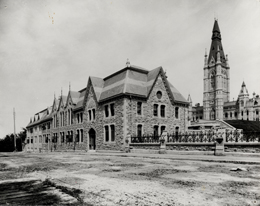 The Court first sat in the Railway Committee Room in the Parliament Buildings, then in several other rooms as they became available. In 1882, the Court moved to its own small two-storey building at the foot of Parliament Hill on Bank Street. It would be another 60 years before construction of the building currently occupied by the Court would begin. Queen Elizabeth laid the cornerstone of the new building in the presence of her husband, King George VI, on May 20, 1939. 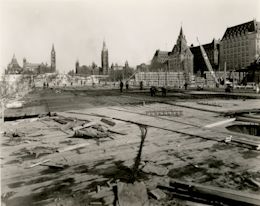 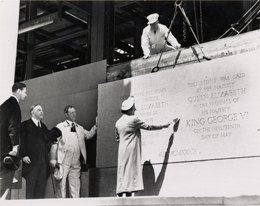 After delays caused by World War II and the government's use of the building to meet wartime needs, the Court finally took possession in January 1946 and heard its first case there on February 5, 1946.